Prismata’s greatest strength has always been our community. Since its creation two months ago, the Prismata Wiki has blossomed into one of our greatest community resources for information concerning Prismata. The Prismata Wiki has become a hugely important resource for both beginners and experts alike, as it contains a wealth of information on every unit in the game (basic tips, advanced strategies, and even build orders). 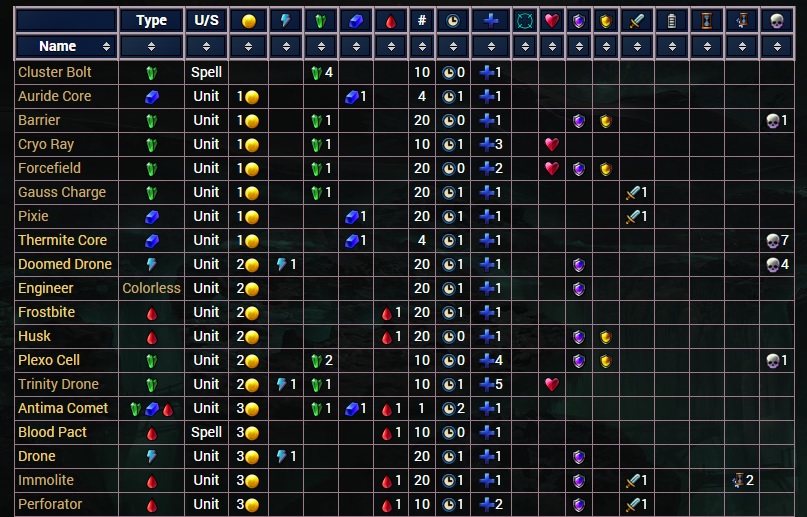 The Prismata Wiki contains a lot of really cool stuff, like this massive unit table! Click for the full table.

We want to make Prismata’s Wiki even better by getting even more people from our community involved! Hence, we’ve decided to run a wiki-editing contest.

Yes, a contest. The kind with prizes!

Anyone who makes a contribution to our Wiki in the next month will receive a new rare emote (“I learned that from the wiki.”), and the top contributors could win a Prismata T-shirt, or the chance to develop their own Prismata emote! More information below.

To kick off the contest, I’ve also written up my own highly-detailed article on one of my favourite Prismata units—the Hellhound. It’s pasted below; feel free to use it as a model for your own articles, or even improve it!

Everyone who participates will receive a prize, but we’ve also got some special prizes lined up for the biggest contributors:

Grand Prize – The top contributor at the end of the contest duration will receive a first edition Prismata T-shirt from the game developers, which features a Prismata logo on the back, and depicts an Animus, Blastforge, and Conduit on the front. Only 100 of these have ever been made and this design will never be reprinted, making it a true collector’s item. The top contributor will also get to work with the Prismata devs to develop their very own text-based Prismata emote to be included in the game when arena mode is added.

Major Contributors – Five (5) of the next top contributors will get to work with the Prismata devs to develop their very own text-based Prismata emote to be included in the game when arena mode is added.

Runners up – Everyone who enters this contest will receive a new rare emote: “I learned that from the wiki.” 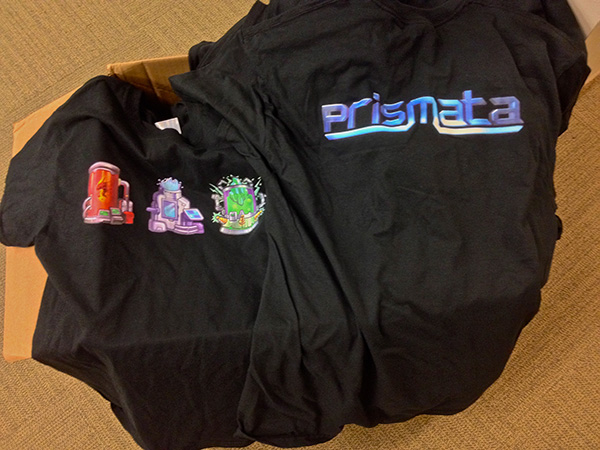 The winner gets a rare limited-edition Prismata T-shirt, featuring the three tech buildings on the front, and the classic Prismata logo on the back. Only 100 of these exist.

TL;DR: all you have to do is edit the wiki. To ensure that your edits are counted, you need to be logged in to make them, which means you’ll need to create a Gamepedia account (don’t worry, it’s easy). The Gamepedia folks are automatically handling the rest of the contest, and they will pick winners based on the quality and volume of each entrant’s contributions.

Editing articles on Gamepedia is pretty straightforward; you just hit “edit” and can then make changes right away. They have a simple markup that can be used for formatting and linking, but being as lazy as I am, I found that the easiest thing to do was just copy the formatting from another existing article.

Q: What Can I Add to the Wiki?

A: Literally anything that might be of interest to the Prismata community.

Much of the current content of the Wiki focuses on game strategy, but there are plenty of things to contribute even if you know nothing about Prismata strategy or tactics. Here are some ideas:

To get things kicked off, I went and wrote a Wiki article for one of my favourite Prismata units—the Hellhound. I hope this article gives you lots of great ideas for new articles, or ways to improve existing ones. That will be all for today’s blog post, but if you’re interested in having a read, I’ve pasted the new Hellhound article below as well. It could still use lots of improvements, including more openings, sample games, and further strategic explanation; feel free to edit it on the wiki!

Hellhounds function very similarly to Tarsiers in that they are both non-blocking units with 1 point of health that attack for 1 damage every turn. However, Hellhounds differ in the following key ways:

Generally speaking, Hellhounds are highly efficient, cost-effective units. At a cost of 5BR, it’s useful to compare the purchase of a Hellhound to that of a Tarsier plus a Pixie (also costing a total of 5BR). If the Pixie is used right away, the Pixie and Tarsier together deal the exact same amount of attack as the Hellhound does (1 damage every turn after the purchase, since the Pixie negates the Tarsier’s longer build time). However, the Hellhound comes with an additional Engineer, making it considerably more cost-efficient than the Tarsier and Pixie, especially if the Engineer can be put to good use as a defensive unit or energy supplier.

The key to using Hellhounds well is to put yourself in a situation where you can construct them cleanly (without having to make other sacrifices to avoid wasting resources or defending inefficiently) and get good value out of the extra Engineer.

Comboing Hellhounds with other Engineer-using units

Electrovore is the most common example of a unit that synergizes well with Hellhound. A Hellhound plus an Electrovore, when bought together, yield a total of 2 damage per turn worth of attack for a cost of only 9BRR (a full 2 gold cheaper than a Cauterizer, closer to the cost of a Hannibull but without the drawback of being Frontline). Moreover, this cost can be split across multiple turns if needed. Fission Turret can be combined with Hellhound in a similar manner.

Tesla Coil is another Engineer-using unit that can combo with Hellhound in some situations. Often in games where Tesla Coil is one of your key attackers, you need to constantly spend 2 gold per turn per Tesla Coil just replenishing your stock of Engineers so that your Tesla Coils can continue firing. Hellhounds instead provide an alternate method of reconstructing engineers, and can effectively act as 3BR Tarsiers with construction time 1 in cases where the Engineer would otherwise be a “must-buy” unit. Hellhounds also effectively extend the supply limit of 20 Engineers (which is frequently relevant in Tesla Coil games), as they do not consume any Engineer supply when constructed.

Hellhound lends itself nicely to low-econ rushes that employ ten or fewer Drones. The core strength of these rushes is due to two strategic principles:

Here are sample builds for both players:

In both cases, players end up with 10 Drones, an Animus, a Blastforge, a Wall, some attackers (Hellhounds and Tarsiers), and some Engineers. From here, it’s possible to pump a Hellhound and a Rhino every turn, switching away from Hellhounds to Walls when defending becomes more urgent. Both players also have the option of building Walls sooner if necessary (which can be useful if the opponent opts for an aggressive response), but doing so may cause a red to be wasted.

Player comparison: Hellhound rushes don’t tend to strongly favour either player, as both players have good timings and options to play more defensively if necessary. With the build orders listed above, player 2 gets the Wall out half a turn sooner, and player 1 snags an extra Hellhound as compensation. Player 1’s build is probably slightly better against passive opponents, but player 2’s early Wall might be favoured against aggressive responses.

Variations: The classic “red rush” units like Electrovore, Grimbotch, and Perforator can enhance the effectiveness of Hellhound-based rush builds, because they provide other options that are often stronger than pure Tarsier play. Chilling units like Iceblade Golem or Frostbite can also be effective if the opponent opts for a defensive or breach-vulnerable strategy.

A final use of the Engineers constructed during Hellhound construction is in building up a larger economy. Often players don’t get attackers like Hellhounds until after they’re mostly done with constructing Drones, but there are some situations where one or two early Hellhounds are used only to lightly harass the opponent while supporting a big economic play.

Here’s one example that uses Chrono Filter, popularized by Fridaytime on reddit.

Flame Animus can behave similarly, supporting builds like the following:

Some of these economic builds can be even stronger in the presence of units like Vivid Drone and Wild Drone as well.

This unit can be attacked directly.