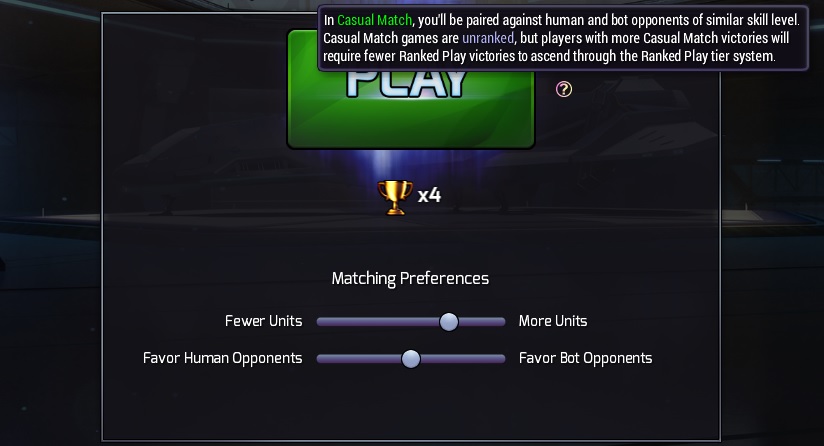 Casual Match was designed mainly for newer players, as well as the large cohort of players who frequently play Master Bot but don’t play much Ranked Play. The new mode offers more variety, as there are over 25 different unique bot personalities, some of whom are very tough! Wins in Casual Match mode earn you prizes. They also provide a bit of a boost if you’re trying to ascend through the early tiers of Ranked Play mode.

Each Casual Bot has a unique configuration file that determines its behaviour. The configurations include settings for aggressiveness, economic and tech preferences, intelligence, and opening books. Our bots use a technique called hierarchical portfolio search to select their moves. Essentially, each bot uses a variety of different methods to generate a portfolio of possible candidate moves, and then does a smart tree search (similar to a chess AI) to find the best choice by looking several moves ahead. The bots differ in which candidate moves they add to the portfolio and how they perform the smart tree search (in some cases, they don’t perform much lookahead at all!)

Our opening books were massively expanded in the Casual Match patch; there are now over 1000 individual lines added. Some of these opening lines include devastating rushes that the Casual Bots love to execute. Here are a few of the bot personalities:

FineToothDrone: Always goes for a low-econ build. Is usually quite aggressive.

GluteusFastimus: Always goes for an early Animus, with a wide number of possible follow-ups.

BottyMcBotFace: Tricky with openings. Sometimes rushes you but sometimes plays like Master Bot.

DrivenUpTheWall: Goes for blue units only. Spams a lot of defense and tries to grind out a long game.

2016MasterBot: Exactly what its name says it is.

HitQ2MakeItRain: Loves high-econ builds. Will buy all the Drones if you let it.

HavoCRusheR: Always rushes, but thinks deeply about which rush it should execute. Follows up aggressively and usually tries to kill you as quickly as possible.

Unexploitable: Never buys any defenders with more than 1 health unless they are fragile.

If you’re in the mood for a tournament, fear not! Many are coming up, including the following: