After last weekend’s Halloween break, we’re now gearing up for the grand conclusion of our big pre-release tourney: the Prismata Alpha World Championship. This weekend is Wildcard Weekend—on Saturday, a selection of the top players from the Grand Prix will be competing for the final two spots in the grand finals, which will take place later this month.

A variety of fun events are planned. Here’s the schedule for the weekend:

We’re going to be running a special test event this Friday on the alpha server. For a few hours, a unique queue will be opened up to allow players to try LEGENDS MODE—an all-new Prismata format. In Legends Mode, two changes will be made to the rules of Prismata:
Sound a little crazy? It is. Here’s an example of some of the shenanigans that can happen: 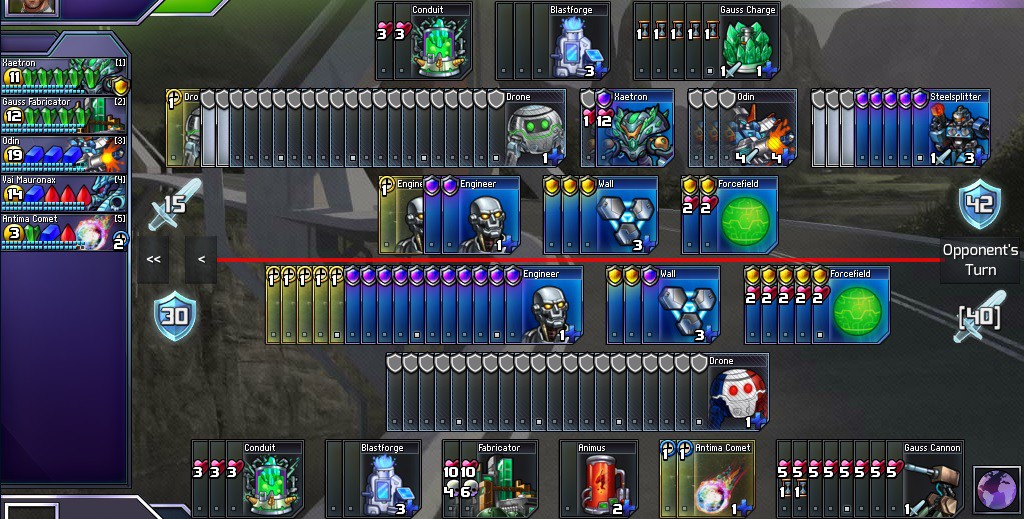 For us, the Legends Mode test will be a step toward the development of a new feature called Prismata events—regularly occurring time-limited special modes and challenges. We’ll be experimenting with alternate rules and trying out various types of brawls, warzone tourneys, and other fun things. The long-term plan is to have a schedule of different events, an event history, and leaderboards/prizes as well, but we’re starting small for now.
Some of the alternate Prismata rulesets will also be tested for the Casual Match mode as we look to provide more beginner-friendly rulesets for new players, various bot personalities to play against, and unranked 1v1 play. You’ll see more of that in the coming weeks. 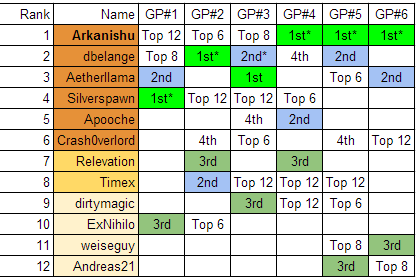 *a ten point bonus was provided to the winner’s bracket finalist in each Grand Prix round.

Players ranked 1 through 6 have already secured their spot in the 8-person PAWC Finals, which will be happening on November 14 and 15. However, two more players from ranks 7 through 12 will be selected to join them, and they will be determined by a special double elimination playoff this saturday—the PAWC Wildcard Tourney.
Players Relevation and Timex, ranked 7th and 8th after the Grand Prix rounds, will be granted a 1-round bye in the PAWC Wildcard Tourney.
The broadcast schedule will be as follows:
Each match will be a best-of-5 with a 45s time limit used for all games. Drawn games will be replayed. In each best-of-5 series:

We’re also going to run a Blitz Tourney this Sunday. The tourney is open to all players who have earned at least 5 Grand Prix points in any of the six PAWC Grand Prix events. This tourney is just for fun, but the winner will receive a one-of-a-kind in-game badge.
The blitz event will consist of several round-robin pods leading to an 8-player single elimination bracket. Full rules for the blitz event are described here.

See you this weekend!

The PAWC Grand Prix has been an extremely valuable experience for us as we work to build Prismata into an eSport-friendly game. We’ve been very pleased with all the feedback we’ve received, and we hope you’re all looking forward to this weekend’s events!